WINNIPEG — Peter Nygard will remain in jail for another week despite his lawyers laying out an updated bail plan for the Canadian fashion king who faces sex trafficking and racketeering charges in the United States. 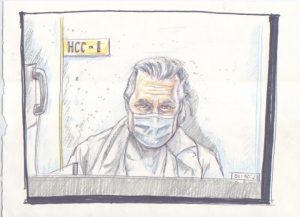 Nygard, 79, was arrested last month in Winnipeg under the Extradition Act and faces nine counts in the Southern District of New York.

Court of Queen’s Bench Justice Shawn Greenberg said she needs time to decide whether Nygard should be released and has reserved her decision until Feb. 5.

His lawyers told court a security company has been hired to provide 24-hour video surveillance of Nygard’s home if he should be granted bail. There would also be a security guard on the premises.

William Dietterle, president of BIL Security, told court it would cost about $20,000 to install the military-grade cameras and an additional $3,000 a month for monitoring.

Federal lawyers questioned how Nygard would pay for the security if his finances are in such dire straits as he has said. Scott Farlinger, a lawyer for the Attorney General of Canada, added that video surveillance ends at the property’s perimeter and would not ensure Nygard follows the rules for his release.

“It doesn’t prevent anyone from jumping on an aircraft,” he said.

Nygard’s lawyers have said his life is at risk behind bars due to the spread of COVID-19 and his health conditions, including diabetes and a pacemaker.

Federal lawyers have told court Nygard has the means to flee and the charges he faces in the U.S. are too serious for his release.

Authorities there accuse him of using his influence in the fashion industry to lure women and girls with the promise of modelling and other financial opportunities.

They allege that for 25 years Nygard targeted women and underage girls from disadvantaged economic backgrounds and forcibly sexually assaulted them.

A full package of extradition materials from U.S. prosecutors is not expected to be provided to Canadian authorities until February. Nygard’s lawyers have said it’s unfair to keep him behind bars without complete information on the allegations.

“It’s so inherently wrong that it flies in the face of fairness,” said Richard Wolson, one of Nygard’s lawyers.

Nygard appeared in a Winnipeg courtroom by video from the correctional centre, where he is being held. He wore a grey shirt with white stains on the front and a large black belt. He had a mask over his face but occasionally moved it, revealing a white moustache and beard. His long grey and white hair was tied in a bun at the back of his head.

Greenberg last week criticized a previous bail plan after court heard a home that a former company executive offered as a place for Nygard to stay was purchased with Nygard’s own money.

Nygard’s lawyers said the additional video monitoring provides assurances beyond what is normally required for bail.

Another Nygard lawyer, Jay Prober, told court it’s difficult to find people to publicly say they would ensure that Nygard follows bail conditions because of widespread media coverage of the allegations.

Federal lawyers said if Nygard is released, he must stay on house arrest, report to RCMP weekly, wear an ankle monitor and remain in Winnipeg. He would also need approval from the attorney general if he is unable to appear in court for any reason.

Nygard founded his fashion company in 1967 in Winnipeg, where it grew from a partial stake in a women’s garment manufacturer to a brand name sold in stores around the world.

He stepped down as chairman of the company after the FBI and police raided his offices in New York City last February.

Nygard is also the subject of a class-action lawsuit in the U.S. involving 57 women with similar allegations.

Two of Nygard’s sons have filed a separate lawsuit against him that alleges they were statutorily raped at his direction as teenagers.

Prober has said his client denies all the allegations against him.

This report by The Canadian Press was first published Jan. 28, 2021