A blast of winter weather that included damaging winds and blowing snow caused chaos on highways in southern Ontario and left thousands of people without power, authorities said Monday.

A major crash on Highway 400 near Barrie, Ont.,
left several people with minor injuries. Local fire
officials said the collision involved more than 70 vehicles and required a
stretch of the highway to be shut down in both directions for about seven
hours.

“We have whiteout conditions right now — snow and
blowing snow — we have zero visibility,” he said from the scene,
where traffic was backed up in both directions.

Videos of the collision posted by Schmidt online show dozens of
vehicles, including several transport trucks and one fuel tanker, smashed
together, with numerous cars also in the ditch.

Schmidt said the fire department had to use the Jaws of Life to
pry some of the vehicles apart.

Samantha Hoffman, a spokeswoman for the Barrie fire
department, said the collision occurred around 10 a.m. on the southbound
lanes of the highway. A 500−litre diesel spill caused by the crash was
under control, she said.

Ryan Harris said he was driving south on the highway when he came
upon stopped traffic that stretched out in front of him for about a kilometre.

“Sometimes I can see the emergency vehicles, but there
are moments where the wind is so strong that it’s just a complete whiteout
and the truck starts shaking,” Harris said in a phone interview from his
vehicle. “It’s really bad.”

Authorities were dealing with other multi−vehicle pileups in other
parts of the province on Monday.

“We’re recommending people stay off the roads today,”
Folz said. “There are whiteout conditions happening all over the central
region of Ontario.”

High winds that swept across parts of the province late Sunday
into Monday also left thousands without power. Hydro One said more than 175,000
people lost electricity in the nearly 24 hours since the storm hit.

Spokeswoman Alicia Sayers said that while the utility has restored
power to the majority of customers, there are still hundreds of outages
impacting more than 9,000 people across the province.

Environment Canada said the wind storm was starting to die down
from peaks registered late Sunday and into Monday morning, but gusty
winds and blowing snow continued to cause treacherous driving conditions
in parts of the province.

Spokesman Gerald Cheng said the winds were still
significant even if they no longer met the threshold for wind warnings in
most cases.

“It is starting to abate, but we’re not quite out of the
woods,” Cheng said. “There’s still blowing snow issues across a large
swath of the province.”

Video footage shot at the nearby Niagara River showed large chunks
of ice spilling over a retaining wall and onto the shoreline, prompting Niagara
Parks Police to close some roadways.

Cheng said areas around Lake Huron and Georgian Bay are most
likely to be affected by snowfall as the storm winds down on Monday,
adding the wind warnings that have been cancelled across most of the
province are still in effect in that region.

Once the wind has died down completely, Cheng said deep cold is
expected to set in across another large swath of the province.

Extreme cold alerts are expected for much of northern
Ontario in the coming days, Cheng said. 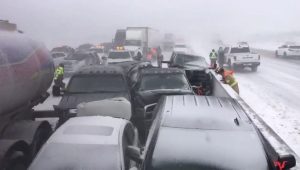 PCOO Secretary Martin M. Andanar said the 52 years of existence of the communist terrorist group has been a major contributor to the disruption of peace and security in the whole country.

Stimulus bill contains provisions for a 10 percent wage subsidy for 90 days, up to a maximum of $1,375 per employee...