TORONTO — Two Canadian nurses who spoke at an anti-lockdown rally in Washington, D.C., on the day of the deadly storming of the Capitol are under investigation by their regulatory body. 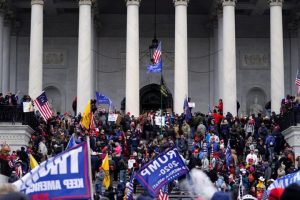 One of them, who is already suspended from her work in neonatal intensive care, is also facing an investigation by her hospital in London, Ont.

In a statement, the College of Nurse of Ontario acknowledged the investigation against Sarah Choujounian and Kristen Nagle.

“We are aware of the information regarding travel to Washington,” the college said. “The legislation does not permit us to provide details on the progress or ongoing status of this investigation.”

The London Health Science Centre said it had suspended Nagle without pay in November for attending an anti-mask rally in the southwestern Ontario city. An investigation was still ongoing into the earlier incident but the hospital said it was now aware of further actions “not aligned” with its values.

“We want to assure our community that we take this situation and the new events that have come to light very seriously,” the hospital said in a statement. “While we are not able to address the specifics of an internal investigation due to privacy.”

The hospital said it would likely complete its investigation within weeks.

Nagle and Choujounian were both speakers at the Jan. 6 rally organized by a group called Global Frontline Nurses, which maintains “fraud is rampant” regarding the COVID-19 crisis inside and outside hospitals. The group said the speakers had seen “blatant deceit” with COVID reporting, and glaring mistreatment of patients first-hand.

Neither woman responded to a request on Tuesday to discuss the situation.

Choujounian, a registered practical nurse since 2004 who spent most of her career at a north Toronto nursing home until last year, has publicly decried COVID-19 vaccines as “experimental” and “unsafe.” The founder of a group called Nurses Against Lockdowns, she has called the vaccine promotion and use a “crime against humanity.”

At the Capitol rally, Choujounian, who said she had been fired, lashed out at the treatment of people in long-term care, saying they were being treated like prisoners in solitary confinement. The situation, she said, was “devastating.”

“The lockdowns have been detrimental to their well-being,” she told the crowd. “Many are dying of failure to thrive and others from broken hearts all by themselves.”

For her part, Nagle, a registered nurse since 2006, said nurses were being threatened for speaking out or holding contrary views but said that would not stop them standing up for the “truth.” She also slammed policies she said isolate new mothers at a critical time.

“We are sharing the truth with you whatever the cost may be,” Nagle said. “Nurses, it is our time to rise.”

Neither woman is reported to have been part of the pro-Donald Trump mob that stormed the Capitol in an effort to halt congressional certification of the presidential vote.

Global Frontline Nurses said it was organizing a news conference on Jan. 21 and called on nurses willing to speak out to come forward.

This report by The Canadian Press was first published Jan. 12, 2021