FRIDAY: BURST OF SNOW, EXTREME COLD BEGINS TO FLOW IN

While winter has been pretty manageable so far, Alberta’s weather this weekend is about to break all the wrong records.

On Sunday, February 7, parts of the Alberta province are going to be hit with the coldest temperatures in 17 years.

The Arctic front that will be responsible for bringing the wickedly cold temperatures and wind chills will also bring a shot of snow to central and southern Alberta Friday. Snow will begin pushing south in the morning in Edmonton and then reaching Calgary, as well as southern Saskatchewan, in the afternoon.

A general 5-10 cm of snow is expected from this system, with around 5-10 cm along the QE2 and the foothills. Snow will push out in the overnight hours.

While these amounts aren’t excessive by any means, the gusty winds will make for occasional whiteout conditions, so travellers need to be mindful before heading out on the roads.

The snow isn’t the main concern with the front, however, as it will usher in extreme, dangerously cold temperatures on the Prairies for the weekend and beyond as the polar vortex sinks south. 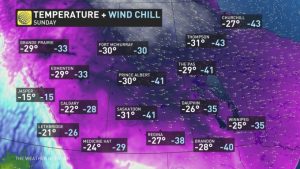 Dangerous cold will persist through the weekend and next week. Temperatures will plunge to -35°C to -45°C, with hazardous wind chills in the -40s and even below -50.

Daytime high temperatures on Sunday will remain below -30°C for Saskatoon, Prince Albert and surrounding areas. So overnight lows will be much colder than that.

That’s before factoring in the wind chill, which will make it feel at or slightly above -40 even at the peak of the day in parts of Saskatchewan and Manitoba Sunday. Even parts of Alberta, whose daytime highs will “only” fall as low as the low minus-20s, like Calgary, Medicine Hat and Lethbridge, will shiver in wind chills bringing them closer to -30.

That’s some serious cold, even exceeding parts of the actual Canadian Arctic. Winnipeg’s Sunday high will be below Whitehorse’s — and with a forecast high of -3°C that day, Iqaluit will be warmer than anywhere on the Prairies due to comparatively warmer easterly flow.

And depending on how it plays out, some cities may see daytime highs fall below -30°C for the first time in more than a decade – in Edmonton’s case, 17 years.