The Honourable Marco Mendicino has been appointed as Minister of Public Safety.

Before entering politics, he practiced law at a top-ranked law firm, where he practised commercial litigation and international dispute resolution. He holds a law degree from Dalhousie University, a Master’s degree in Public International Law from Leiden University in the Netherlands, and a Bachelor of Science from St. Francis Xavier University.

Minister Fraser grew up in Pictou County and has family throughout the Town and County of Antigonish. He enjoys spending time in Central Nova with his wife, Sarah, and their children, Molly and Jack.

Fraser has been the MP for Central Nova since 2015, following the departure of prominent Conservative cabinet minister Peter MacKay, who stepped away to spend more time with family.

“Sean Fraser is a quality, quality individual,” Houston told reporters at Province House. “He’s a great ambassador not only for Pictou County but for all of Nova Scotia. I am really excited to have Sean in that role. I think he’ll do a tremendous job.”

Houston will be looking to Fraser as he pushes to double Nova Scotia immigration. 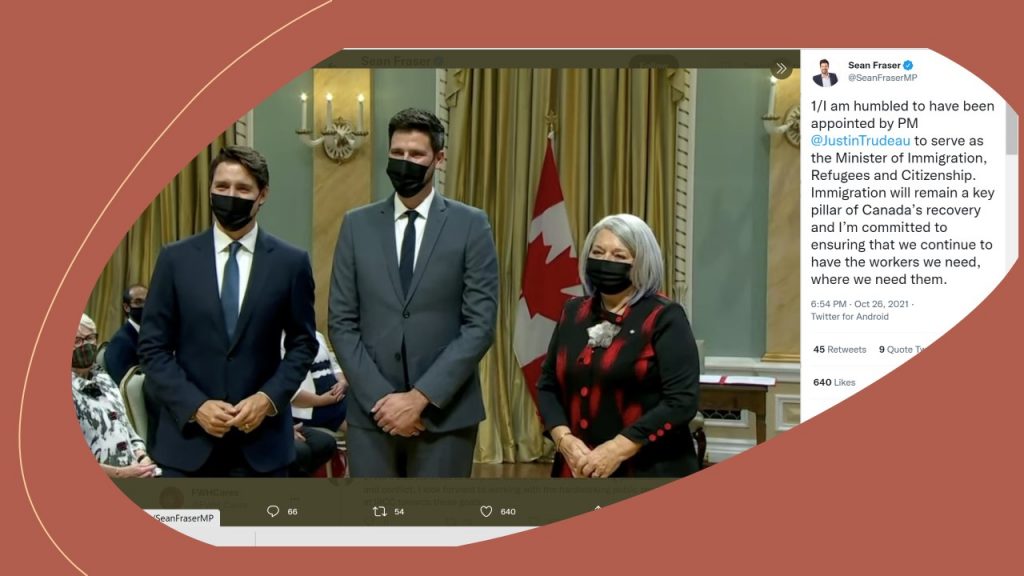 What’s next for Canadian immigration?

PM Trudeau is expected to release new mandate letters for the newly appointed ministers. This letter will guide the ministers in setting the priorities of their department.

In the 2021 election campaign, the Liberals immigration platform includes a promise to waive citizenship fees, reduce the backlog and application processing times and make reforms to Express Entry, such as offering more immigration pathways to temporary foreign workers and international students.

Canada is now taking in well in excess of 1 percent of its population of 38.5 million annually.

The Immigration Department has been meeting these targets by converting temporary workers, international students and asylum claimants already in Canada to permanent residents.

Broadly speaking, the Liberals will be tackling major immigration issues during their new mandate. These include identifying how they will reduce application backlogs that have grown during the pandemic, potentially reforming Express Entry and the Parents and Grandparents Program, launching the Municipal Nominee Program, and waiving citizenship fees.