SAN FRANCISCO — The Philanthropic Organization of the Year, the first-ever recognition of its kind in Daly City, California, was awarded to the Felix Y. Manalo Foundation, Inc., the socio-civic platform of the Iglesia ni Cristo (Church of Christ).

The award of recognition was presented by Mayor Glenn Sylvester and the City Council of Daly City during a ceremony through video conferencing on December 14.

“This year, I’m proud and honoured to give the Philanthropic Organization of the Year to Felix Y. Manalo Foundation Incorporated,” said Mayor Sylvester. “This organization provides aid to humanity in several ways. For the city of Daly City, that meant bridging the digital divide within our community. Especially stricken by this pandemic were our youth and our most vulnerable, our seniors. In response, the Felix Y. Manalo Foundation donated 80 laptops to the city.”

Mayor Sylvester recognized the FYM Foundation for its recent Aid to Humanity effort held in October, which helped provide resources and fund program enrichment for youth and the elderly. It was the second educational donation from the FYM Foundation for families in the region, following a similar gift to the Boys & Girls Club of San Mateo County in September. 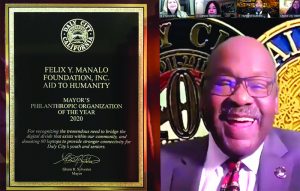 The District Minister said, “We [the Iglesia Ni Cristo members] are truly honoured to receive this award. We attribute all the success and triumph of the Church to the Almighty God through the dynamic leadership of our Executive Minister, Brother Eduardo V. Manalo. We will continue to assist this wonderful city in its humanitarian and social civic works through our Aid To Humanity programs.”

Witnessing virtually from Quezon City, Philippines, was Brother Glicerio Santos IV as the Felix Y. Manalo Foundation representative. Both he and FYM Foundation President Brother Glicerio B. Santos Jr. were also recognized for their continued assistance in the leadership of the outreach efforts taking place worldwide.

In his acceptance speech, Brother Inocencio also thanked the INC Executive Minister Brother Eduardo V. Manalo “for his direction and guidance over the Iglesia Ni Cristo in its entirety.”

“We will never stop our Aid To Humanity efforts,” Brother Esteban Inocencio noted. “We work side by side with the city governments, with the guidance that we are given by our Executive Minister, Brother Eduardo V. Manalo. So we would be able to make a difference and cause a positive impact on society, in being able to do this good work for the glory of the Almighty God.”

With congregations in 158 countries and territories, the Iglesia Ni Cristo conducts Aid To Humanity events worldwide. In Canada and the United States, it has helped thousands of low-income families with their basic needs and donated to hundreds of charitable organizations.

The government of Canada will provide 16 weeks of payments to workers whose income drops to zero because of the pandemic....