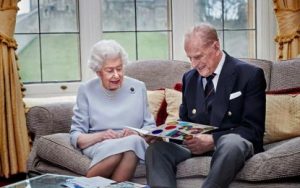 Prince Philip: 1921-2021 (Photo courtesy of The Royal Family Facebook)
Prince Philip, 99, “passed away peacefully” at Windsor Castle on Friday morning, the Buckingham Palace announced in a statement posted on its social media accounts.

Roque said the Philippines joins the United Kingdom in mourning the passing of the prince, who would’ve turned 100 on June 10.

“The Philippines and the United Kingdom have strong bilateral ties and we share the grief of the British people in this period of bereavement,” he said.

Roque hoped the Royal Family would find strength to go on after Prince Philip’s death.

“We pray for the eternal repose of his soul and for The Royal Family to find strength in this time of mourning,” Roque said.

The Duke of Edinburgh, the longest-serving consort in British history, was hospitalized in February for a heart procedure.

He returned to Windsor Palace in March.

He married then-Princess Elizabeth in 1947. Five years later, she became queen after her father’s death.

He retired from public duties in 2017.

The couple has four children – Prince Charles, the heir to the throne; Princess Anne; and Princes Andrew and Edward. (PNA)