30 November 2021, Toronto – The Philippine Consulate General in Toronto led by Consul General Orontes V. Castro celebrated Bonifacio Day with an event with the Filipino community at the Kalayaan Community Center in Mississauga, Ontario, Canada. The Guest of Honor during the event was The Honourable Doug Ford, Premier of Ontario.

The event, which was co-hosted by Ontario’s Ministry of Citizenship and Multiculturalism, was attended by around 100 Filipino community and business leaders. Officials from the Premier’s Office were also in attendance including the Honourable Pharm Gill, Minister of Citizenship and Multiculturalism; and the Honourable Deepak Anand, Member of the Provincial Parliament and Parliamentary Assistant to the Minister of Labour, Training, and Skills Development of Ontario.

Before the start of the program, Premier Ford and Consul General Castro had a bilateral meeting during which they discussed the strong relations between the Philippines and the Province of Ontario and the vital contribution of Filipinos to the province of Ontario.

After the bilateral meeting, Consul General Castro also presented to the Premier the student winners, together with their parents, of the Sentro Rizal Toronto-Philippine Consulate General Toronto’s Padayon Art Competition titled “Paghilom at Pag-asa Mula sa Pandemya.” The Premier was delighted and amazed with the artworks and the student winners, with 111 artworks submitted from elementary and secondary students from the City of Toronto, Ontario.

During the program proper, Consul General Castro noted in his remarks the expansion of Filipino-owned businesses in Ontario, particularly Jollibee and Seafood City, even during the pandemic; and the increasing role of Filipino-Canadians in politics, noting the recent election of Honourable Rechie Valdez in the Canadian Parliament. He further echoed H.E. President Rodrigo R. Duterte’s call to Filipinos to emulate Bonifacio’s strong sense of civic duty.

The Premier, in his remarks, thanked the Filipino community for their contribution to the province. He made a special mention of the vital role of Filipino-Canadian health care workers during the pandemic. He expressed optimism that the Philippines and Ontario will continue to have a great relationship.

“As hundreds of thousands of Filipino immigrants and their descendants have found opportunity here in Ontario…and we are grateful for all they have contributed to our province,” said the Premier.

As the highlight of the program Consul General Castro presented the Premier with a Quincentennial Award in recognition of his leadership and support to the Filipino community and the Philippine Consulate General, especially during the pandemic. Ms. Judy Montenegro, Vice President of the Kalayaan Community Center, was the emcee of the Program. END- 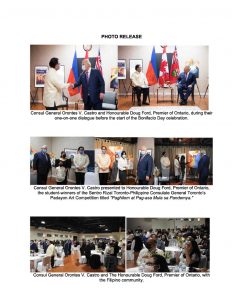 The Red Cross workers headed for Quebec will remain at the homes until Sept. 15, by which time thousands of workers hired by the province are expected to be trained and ready to take over the jobs.