MANILA – Filipino Ernest John “EJ” Obiena is eager to bring his fellow world-class pole vaulters to the Philippines in an invitational tournament next year.

“The objective is to bring them here after the outdoor season’s over,” said Obiena, who discussed his plan with Philippine Olympic Committee President Abraham “Bambol” Tolentino during their conversation last week in Tagaytay.

The pole vaulter was accompanied by girlfriend Caroline Joyeaux, a long jumper from Germany.

Tolentino, a former congressman who is now Tagaytay City mayor, described The Picnic Grove as “an ideal venue”. 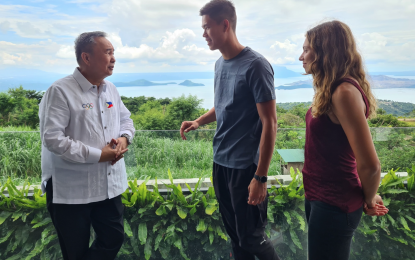 “With the Taal Volcano as backdrop, what more could you ask for — a world-class pole vault action in one of the most picturesque tourist attractions in the country. Every jump will be postcard-perfect,” he said.

The setup of the venue, according to the world No. 3 Obiena, is the same as in Europe — a street venue where the runway, the box, crossbars and landing area are all easily moved or collapsible.

With the European outdoor season ending in early September and the Asian Games in Huangzhou, China scheduled on the same month next year, the pole vault invitational could be held in late September or early or mid-October.

Obiena said the plan is to have a spectator-friendly invitational event sanctioned by the World Athletics, the international governing body of the sport.

Tolentino noted that tourism will benefit from the staging of the pole vault invitational, saying “it’s great for tourism and the Philippines will be in the international pole vaulting map. It’s very doable despite next year’s busy schedule. It’s going to be a big event so we have to plan this carefully.”

Obiena said both the Philippine Sports Commission (PSC) headed by Noli Eala and the Philippine Athletics Track and Field Association (PATAFA) under president Terry Capistrano would play key roles in the success of the tournament.

“I also love to see Hackett de los Santos to experience and compete with the best athletes,” he added. Delos Santos bagged a silver medal in the Vietnam SEA Games last May.

“This is going to be historic that’s why I am pushing for it. Pole vault is a standard competition so it’s doable,” said Obiena.

He is hoping to encourage the PSC, local government units and big business to put up more pole vaulting venues around the country. (PNA)

MANILA — Ernest John “EJ” Obiena made one final jump for the year and won gold in the Gala Dei Castelli athletics competition in Bellinzona, Switzerland on Tuesday (Philippine Time).

Just when many thought the world number three pole vaulter is done for 2022 with the gold in the Golden Fly Series in Liechtenstein, he showed up in Bellinzona and won it all again, beating world number two Chris Nilsen and Renaud Lavillenie for the top prize.

Obiena cleared the bar up to 5.81 meters, a new record for the event, even as Nilsen and Lavillenie could only reach 5.71.

Unlike in Liechtenstein where he tried to jump six meters, Obiena took it a bit slow in resetting the Asian record for pole vault, attempting 5.95 meters, but he fouled in all of his three attempts.

Now that his season is officially over, Obiena thanked his supporters for their help in his successes this year, highlighted by his huge win over world number one Mondo Duplantis in the Wanda Diamond League earlier this month.

Nilsen won in a countback to take the silver from Lavillenie, who settled for the bronze. (PNA)