MANILA – The government has set aside a portion of the latest shipments of American-made coronavirus disease 2019 (Covid-19) vaccine for the inoculation of minors.

“Yes, nakapaglagay na tayo ng buffer, we already allocated a buffer and the same time, this coming next week na meron pa din dadating na Pfizer, so ayun ‘yung mga gagamitin natin yung mga dadating na bago (We have already allocated a buffer stock, and at the same time, we expect deliveries of Pfizer next week so we will be using those newly-delivered vaccines),” National Task Force against Covid-19 chief implementer, Secretary Carlito Galvez Jr. said in an interview during the arrival of the 797,940 doses of government-procured Pfizer vaccine at the Ninoy Aquino International Airport Terminal 3 on Thursday night.

The Food and Drug Administration (FDA) earlier approved the use of the Pfizer and Moderna Covid-19 vaccines for adolescents, allowing these to be administered to those aged 12 to 17.

The inoculation of minors will be piloted in eight identified hospitals in the National Capital Region (NCR) starting October 15.

Galvez, meanwhile, said the latest shipment of Pfizer jabs will be given to major cities and in Central Luzon, Calabarzon, Western Visayas, and some areas in Northern Mindanao.

He also thanked the US government and Pfizer “for being faithful in deliveries”.

Galvez also said Thursday’s deliveries are one of the biggest for this week, which now has reached more than 10 million.

Galvez said also this is the second day that the country has received a shipment of more than 500,000 vaccines. 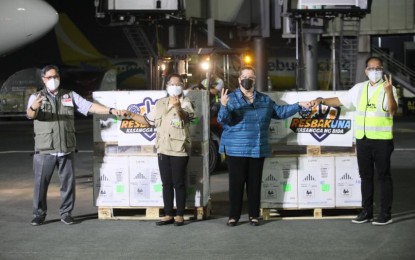 Meanwhile, US Embassy Chargé d’Affaires, ad interim Heather Variava, who was present during Thursday’s Pfizer delivery, said they are very happy that more of these life-saving jabs are arriving in the Philippines.

“We, in the United States, believe Pfizer is one of the best, safest, and most effective vaccines. We are really happy that there’s more coming in the Philippines to help protect the people from (Covid-19),” she added. (PNA)

The Red Cross workers headed for Quebec will remain at the homes until Sept. 15, by which time thousands of workers hired by the province are expected to be trained and ready to take over the jobs.